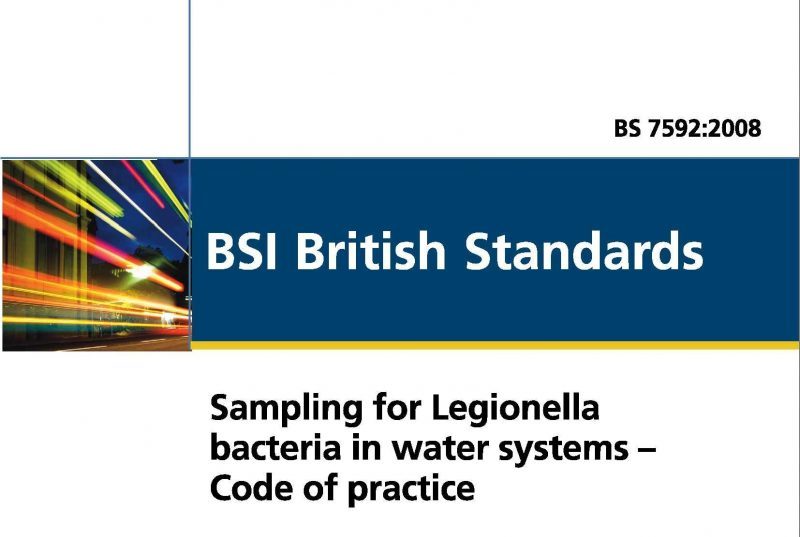 How to test for Legionella and Pseudomonas in the presence of copper/silver; the outcome of the discussion and various researches is described below.

“if biocides are known or suspected of being present, sterile bottles containing suitable neutralizers should be used to stop the action of the biocide at the time of collection. Oxidizing biocides such as chlorine, bromine, and chlorine dioxide are easily neutralized, for example with sodium or potassium thiosulphate. For most purposes, 180 mg of sodium thiosulphate pentahydrate will neutralize 1000 mL of water containing up to 50 mg of chlorine. if levels are expected to exceed this, additional sodium thiosulphate should be added, otherwise tests could be invalid and the results misleading. NOTE 1 Commercially available tablets are available for use on site. For biocides containing silver and copper, the chelating agent ethylenediaminetetraacetic acid (EDTA) can be used at concentrations of 10 mg per litre. the neutralizers EDTA or sodium nitrilotriacetate (NTA) are described in BS En iSO 19458 and can be used as a filter-sterilized solution at a final concentration of about 50 mg per litre but should only be added when necessary (e.g. water treated with silver or copper). Silver can also be inactivated by sodium sulphide (1 mL of a sodium sulfide solution to 1 L of sample) (BS En iSO 19458).”

“It should be further noted that dosing a 1 L sample bottle with 180 mg of sodium thiosulphate (equating to 180 mg/L in the final sample) will neutralise up to 50 mg/L free chlorine or will neutralise up to at least 80 µg/L silver and 600 µg/L copper). Sterile bottles are normally purchased containing the neutraliser. However, EDTA has been found to be totally ineffective as a neutraliser for silver and therefore should not be used as such in any bacterial test including P. aeruginosa and Legionella spp.”

Clearly then both cannot be correct as they are opposites so which to believe. Contributors from the Netherlands commented they add “thio for the chlorine but also “NTA” a complexing agent, like EDTA, that binds metals. This way copper and silver are neutralised and disinfection is stopped right after sampling.”

There are no supporting scientific papers readily available on the internet to support any of these views.

What there is is an interview on a website of a supplier of products where the Chief Scientist of a testing lab describes in-house work carried out.

Unfortunately, this is not published evidence, yet.

The problem this all raises is that we have a current British Standard (which may or may not be about to be to updated, but is still current) and an HTM document that contradict each other. So what to do?

The interview with the Chief Scientist explains how his laboratory have carried out tests to show EDTA does not work and that 10 times normal quantities of sodium thiosulphate are required in the bottle. The interviewer comments that “This was a long awaited publication [BS8554:2015] (by us at least), which gives more clarification in regard to the issue of which copper and silver neutralising agent to use when sampling water for Legionella analysis (sodium thiosulfate or EDTA). This was not clear in the now out-of-date standard BS 7592:2008 (Sampling for Legionella bacteria in water systems – code of practice).”

The difficulty is that BS7592 is not “out of date” it is still an active document, whilst being over 10 years old and that BS8554:2015 states “4.3.5 The laboratory carrying out the analysis should be consulted about: a) selecting the correct sample containers (see 5.1.6) and determining whether any chemical neutralizing agent is required”.

Unfortunately, this does not represent clarification that is explicit, it is a recommendation to talk to the laboratory.

So, until the situation is clarified by an explicit statement in any update of BS7592, we have 3 possible answers to the question of what neutraliser to use in the presence of copper/silver when testing for Legionella or Pseudomonas:

It is therefore hoped that the scientific paper that the Chief Scientist and the PHE are currently writing is published quickly so that this situation can be clarified as it currently leaves the customer and the person carrying out the sampling without clear guidance as to what to do (other than for the company who interviewed the Chief Scientist).

As an Expert Witness, if I was asked to give an answer to the question as to what neutraliser to be used, I would have to explain all the above and say that, currently, there is no published scientific papers on which to base a definitive decision. However, in my professional opinion, I believe that the current strength of argument (and also a review of Stability Constants of Chelants, for example: https://www.dojindo.com/Images/Product%20Photo/Chelate_Table_of_Stability_Constants.pdf ) rests with the Chief Scientist.

So, for those of you who take Legionella and Pseudomonas samples in the presence of copper/silver biocides you should ensure your laboratory supplies you with sample bottles that contain 10 times the normal amount of sodium thiosulphate.

Note that this means you would not be complying with BS7592 so you would need to make it clear to your customer why you were not doing so and the customer should note that decision in their Written Scheme as currently HSG 274 states “2.121  Where monitoring for legionella is considered appropriate in hot and cold water systems, sampling should be carried out in accordance with BS 7592:2008 Sampling for Legionella organisms in water and related materials” which means you would not be complying with HSG 274 Part 2.

This information is correct as of January 2020, until such time as BS7592 is re-released when it is expected this situation will be clarified.